Starting with a concept sketch I work out all the bobwhite quail placements and wing positions to create visual harmony and depth into the landscape.

I sketch the scene onto the canvas to re-create what I did in the concept sketch, only with a lot more detail. I use my models, taxidermy, photo reference and frozen skins and skulls to bring an authenticity forward to the birds.

Each Quail is detailed out with a sepia hue (burnt sienna and permanent mauve).

The same thing is done to the background. Establish shape and form and add a base color to the sky to pull it out from the background foliage.

Then I start with oil paint at the top and progress from the background to the horizon line and make sure the edges are soft. Since I need to paint everything wet on wet I only proceed with what I can accomplish in the allocated time for painting that day. Each day I must come to the studio and put myself in the same state of mind where I left off the night before. Challenging to do with painting for nearly 18 to 20 hour days, but this becomes all consuming at this point. I cannot think of anything else until it is done. Large paintings like these takes months and months to complete. 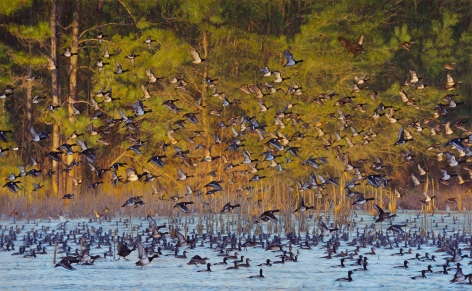 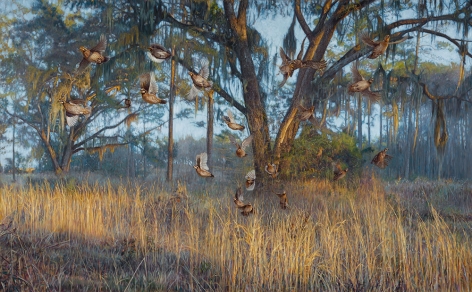 Once in a great while, an opportunity to create one’s magnum opus arises and calls forth every creative cell an artist possesses. One of my best clients invited me to his new Georgia quail plantation to explore the idea of creating a pair of paintings to be featured in the main pavilion of a new estate that will become one of the finest homes in America. The main Pavilion was designed to blur the line between the exterior and interior by using solid glass walls on the entire perimeter. Four 200 plus year old live oaks were transplanted just outside what would become the perimeter walls.

With only two opaque surfaces (two opposing fireplaces where my paintings would be the only two dimensional art in the space), this level of focus warranted my best work that I have yet created. Following the high creative bar and vision set by Lead Architect Allan Shope, supported by a master building team of top contractors, I too, had to dig deep to knock it out of the park.

After discussing things at length with the homeowner and the architect we chose subject matter that would center around two prominent spaces found on the plantation, Ring-neck Ducks and Bobwhite Quail. That settled, I wanted to attempt something that to my knowledge, has never been painted before, a flock of birds in flight with a a raptor hitting one of them in mid flight. This would become the key source of disruption in the “Flush” scenes.

A Cooper’s Hawk will have just hit the Bobwhite Quail and a Peregrine Falcon will have just hit a Ring-neck Duck. With all great realism, you are only as good as your understanding of your subject, so I plunged in with both feet to attempt to become an expert on Bobwhite Quail, Ring-necked Ducks, Cooper’s Hawks and Peregrine Falcons. I embarked on a year long study, film, falconry, taxidermy, skulls, scientific study, skins, conversations with the nation’s leading experts and A LOT of sketching.

I hired several great photographers to join me on many falconry excursions to attempt to capture the moment of impact. I sent these skilled cameramen into the field (after purchasing many live quail and ducks from breeders) for multiple attempts in setting up such a scene. I personally spent substantial time in the field hunting birds, stalking birds, sitting at the end of Quail Flight Pens (which can be a messy business).

After assembling over 20,000 photographs I was ready to begin. I choose compositions that represented the movement of wings in flight in dramatic light The Ring-neck Ducks in Flush l were going to be featured in early morning light, but I wanted to place many of the birds in shadow as well, making for a kaleidoscope of shadow, light and bursting color. The Quail of Flush ll would be the same early morning light but dappled over the live oak and cypress forest in the background. The flock would include male and female quail, 23 in total, coming nearly straight towards you, making it the most challenging depiction.

The drawing took nearly six months, the underpainting another two months, then the overpainting in oil took nearly four months of 15 to 20 hour days. One particular energetic day I was in the studio 23 hours. Because this project had a completion date that I could not miss, I used every trick I knew to inspire me on those long days and short nights. But I set a creative goal to make it appear as if it was effortless, painted in a single day. This involves using large brushes, simple deliberate strokes, and a mountain of wet paint.

After what has been nearly a two year project and months and months of oil painting I am proud to announce "Flush l and Flush ll" have now been completed and installed in their permanent locations. Motorized lifts take these 9’ x 7’ paintings into the ceiling revealing two 110 inch flatscreen televisions. The perfect way to make space multi dimensional.

This was a herculean effort and I was blessed in the fact that so many people worked so hard to get me the reference I needed. From the management team at the Plantation in Georgia, world class photographers and falconers, to the duck breeders and taxidermists….I thank them all from the bottom of my heart. These two oil paintings truly took a village and will always remain as two of my most challenging works.